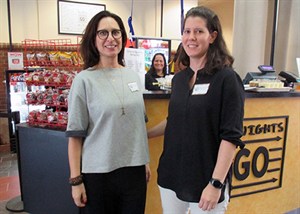 Nilly Waiserberg and Stephanie Libzon from Tel Aviv University, with Diana Tafur inside the kiosk

Physical therapists from as far away as Israel gathered Jan. 20-21 at the College of Health and Public Affairs for the first global summit of the mobility project known as Go Baby Go!

Joining the group was Professor Cole Galloway from the University of Delaware, who founded Go Baby Go! to develop new and inexpensive ways for individuals with mobility impairments to explore their world. The project’s innovations include modified ride-on cars for young children and harness systems for children and adults.

“We came together to synchronize ideas,” said physical therapy Program Director Patrick Pabian. “We want to have the same message and collectively raise the visibility of Go Baby Go!”

“We began the summit with chapter reports,” Tucker said, “so everyone had an overview of what others are doing around the country. What they’re doing is amazing.”

Galloway (left photo, standing) followed with a state-of-the-project address to the group. He described Go Baby Go!’s reach, which now includes 50 hands-on workshops, more than 6,000 modified ride-on cars, more than 10,000 Facebook followers, a TED talk and an exhibit at the Smithsonian Institution in Washington, D.C.

He also spoke about the latest Go Baby Go! initiatives, which include partnerships with the toy industry and development of Go Baby Go! homes near the University of Delaware campus. The homes will feature harness systems for adult clients that are “user-designed,” Galloway said. “It’s not high-tech, it’s go-tech.”

Later Galloway and the participants discussed strategies to seize opportunities and address challenges in the future. They also participated in a brain-storming session complete with white boards and colored markers (photo below).

The summit provided an opportunity to showcase the college’s Knights on the Go Cafe, which features a Go Baby Go! harness system for adults with mobility impairments.

Tel Aviv University physical therapist Nilly Waiserberg was among those who watched client Diana Tafur move around the food and beverage kiosk with support from the harness system. Waiserberg was pleased to see the system in operation and would like to implement it in her country.

“It’s been amazing to meet all of the people and learn from them,” Waiserberg said. “We are going to come home with many insights.”

She started a Go Baby Go! chapter in Tel Aviv a year and a half ago and initially focused on building modified ride-on cars for children with impaired mobility.

“There is an enormous need in Israel,” Waiserberg said. “We’ve already given away 150 cars, but we always have a waiting list for 100 more.”

UCF Physical Therapy Program Ranks Among Top 25% In The Nation