For the Love of Zeke: Alumnus Creates Endowed Scholarship to Honor His Brother 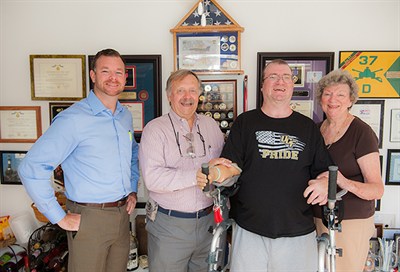 UCF alumnus Adam Marek and his family have established the Russ Marek Medical Endowed Scholarship for students in the college’s Doctor of Physical Therapy Program. He initiated the scholarship to honor his brother, Russ, also known as “Zeke,” a man with an indomitable spirit in the face of adversity.

When U.S. Army Staff Sgt. Russ Marek (ret.) of Viera was horrifically injured during his second tour of duty while serving as a tank commander in Iraq in 2005, his family decided early on that a key to his survival was to treat him as they had treated him before — with a warm, loving sense of humor, and to not let Russ or his friends and family give in to any feelings of pity.

Russ’ tank was the last in a formation of three to roll over a culvert hiding a massive “IED” (Improvised Explosive Device) that September day. The 70-ton M1A1 Main Battle Tank was no match for the 1,000 pounds of explosive wrapped around a 155 mm artillery round that shot up through the bottom of Russ’ tank, blowing the 23-ton turret completely off the tank hull. Three soldiers in Russ’ unit perished that day. Three other soldiers, including SSG Marek, were severely injured as insurgents were able to destroy two M1A1 battle tanks.

A quick response by Army medics saved Russ’ life. When the phone rang at his parents’ home that evening, Russ’ mother, Rose, said, “It’s the Army, they must be calling to let us know of Russ’ travel plans,” as he was eight days from coming home for his upcoming “R & R,” military slang for “Rest and Relaxation.”

His father, Paul, wryly noted that the slang went on to take on a whole new meaning for Russ: “Recovery and Rehabilitation.”

Adam Marek, B.S. ’02, was the first family member to arrive at Walter Reed Army Medical Center in Washington, D.C. He said his first thought upon seeing his comatose brother was, “Man, what are they feeding him?” Russ, a trim, active soldier, was nearly unrecognizable — his injuries and wound dressings had given him the appearance of someone much heftier.

As Adam talks about his first impression of seeing his grievously wounded brother, he smiles. “If he had a bolt going through his neck to hold his head on, he would have looked like Frankenstein.” Russ, sitting close by, also smiles, as do his parents, Rose and Paul. They smile not because it was funny, but because of how far the family has come since those first bleak days.

Russ has no memory of the explosion or its aftermath. “It’s very fortunate that he doesn’t remember,” Rose said. If he remembered what happened he would likely suffer from post-traumatic stress, which until recently, was classified as a disorder, she explained. In addition to partial amputations of his right leg and arm, Russ also suffered third-degree burns over much of his body, had his right ear burned off and had to have his left thumb removed by doctors. He also suffered a traumatic brain injury that Rose said was similar to “shaken baby syndrome.”

Rose knew that constant stimulation was crucial to Russ’ recovery. As she sat by the side of his bed while he was in a coma, Rose would play, over and over, a counting game with his exposed toes. And when Russ emerged from a coma 13 weeks later, he reached over to Rose and said, “This little piggy went to market.” Rose burst into tears.

Thanks to the constant attention from his family — they attended nearly all of his therapy sessions, Russ never gave up. 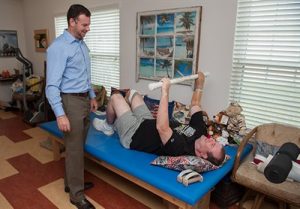 Russ’ journey to recovery was monitored and meticulously documented by his very involved family, which also includes an identical twin brother, Todd, and a sister, Sarah. Photographs show a sweaty Russ receiving physical therapy with his new prosthetic leg, and learning how to co-contract his arm muscles to use his myoelectric prosthesis.

There were some bumpy patches in the road. When Russ was in rehabilitation in Tampa and the clinicians first suggested the addition of prosthetics to his therapy, he resisted. Russ changed his mind after a visit to the nearby Clearwater Marine Aquarium. There he met Winter, a bottlenose dolphin who lost her tail after getting caught in a crab trap. When Russ saw that Winter was getting along just fine with her new prosthetic tail, he said, “If Winter can do it, I can do it.” 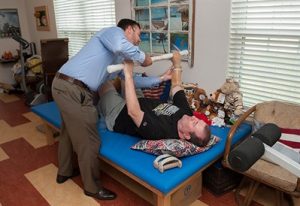 When Russ was injured, Adam was already making a name for himself in sales and marketing. Adam eventually established his own company, Marek Medical Marketing, which specializes in orthopedic sales. The company recently celebrated its 10th anniversary, Adam said.

As Adam began achieving some of his business goals, he also began to think of the most meaningful way he could give back to his community. And on a personal level, Adam wanted to recognize and honor his brother’s sacrifices. Russ inspires everybody in the Space Coast community, Adam said, from his work with mentoring other combat-injured veterans to talking to young students in area STEM programs. But no one is more inspired than Adam himself. “He is my hero,” Adam said.

Adam and his family established the Russ Marek Medical Endowed Scholarship for full-time graduate students in the Doctoral Program in Physical Therapy. The program, offered through the Department of Health Professions at the College of Health and Public Affairs, fosters excellence through its dedication to foundational sciences, clinical skill proficiency, research and evidence-based practice, service and professional duty, and lifelong learning.

The Mareks support UCF’s physical therapy program because they are 100 percent certain that Russ would have remained a quadriplegic without the wonderful physical therapists who were with him every step of the way. “I have gotten a lot better,” Russ said, smiling.

“Zeke doesn’t have a disability,” Paul said. “We focus on his abilities.”  “Zeke” is just one of the nicknames that Paul has given to each of his children. The nicknames are part of the family’s rich traditions of love and humor that have fostered their resilience.

“I can do anything I set my mind to,” Russ said. 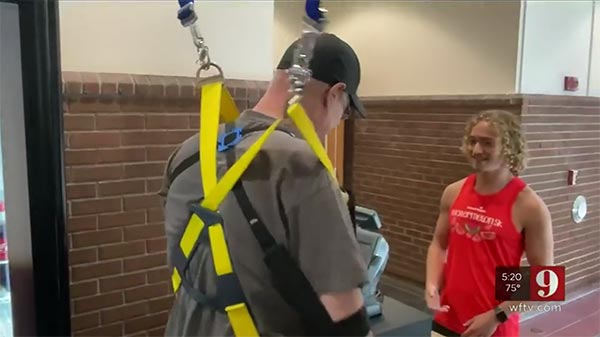 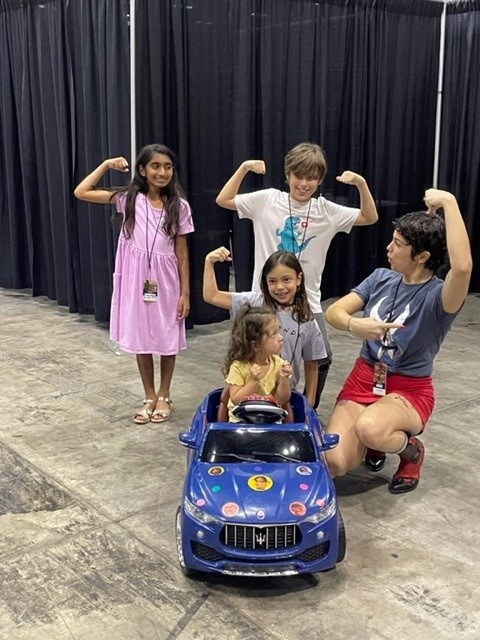 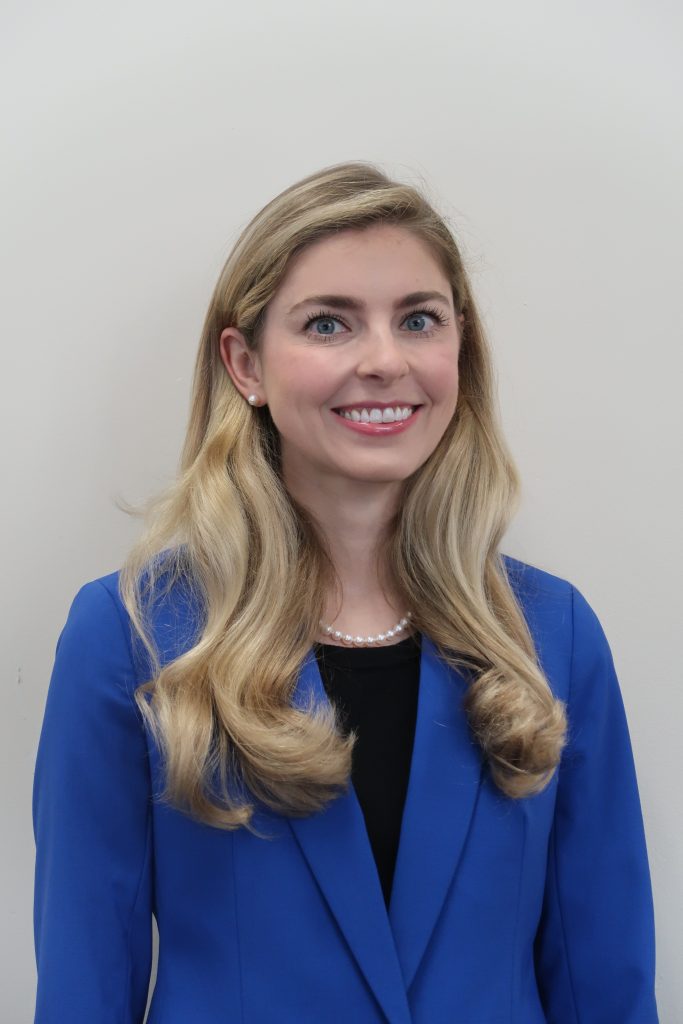 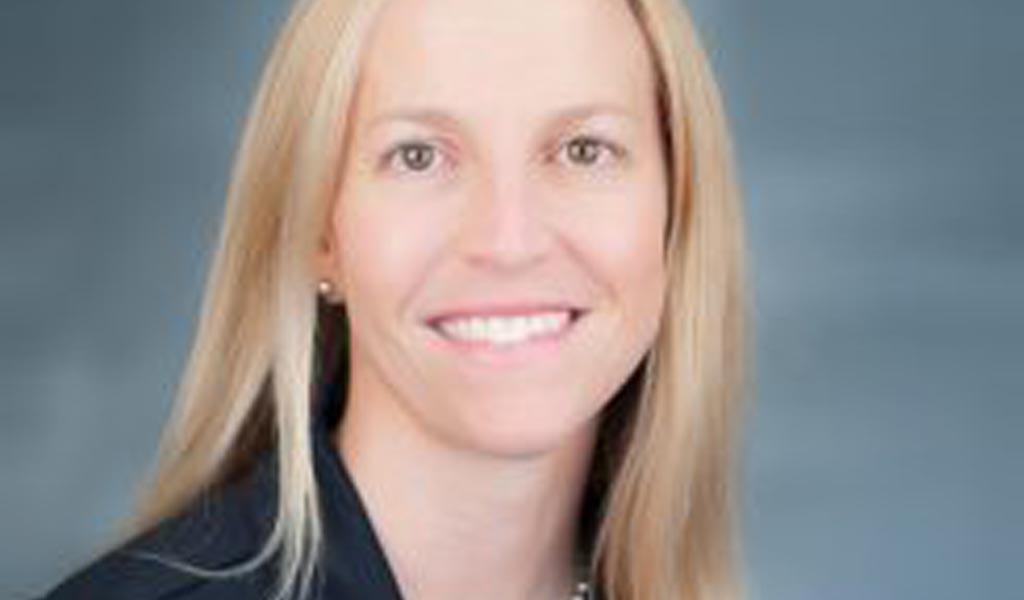 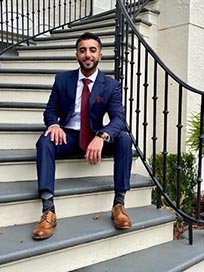