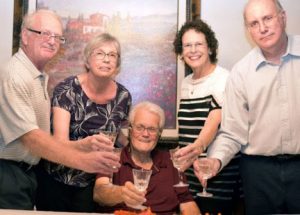 The Mike Murray Make A Difference Scholarship was established in honor of Murray, known as “Da Voice” in the Central Florida community for his booming, powerful announcer’s voice at Dr. Phillips High School basketball games. Murray has been battling Parkinson’s Disease since 2008.

Instead of quitting when his voice was taken away, he focused on abilities rather than disabilities. He used one of his other gifts—his superb writing ability—to share his personal experiences and send a compelling message to others with disabilities.

Murray has dedicated the last 15 years of his life to providing a voice to those who have “lost their voice”—often quite literally—due to aphasia, deafness, cognitive limitations or progressive disease processes.

The scholarship was created from donations from three of Murray’s long-time friends and colleagues from the Society for Technical Communication, and supports students who focus on abilities instead of disabilities.

Scholarship applications are only available online through the A2O portal. You will only see scholarships for which you meet the basic eligibility requirements.

DON’T MISS YOUR
OPPORTUNITY TO APPLY!

How do I apply?

Do I need to include any supplemental information?

Some scholarship applications may require you to upload a resume or an essay. Make sure all required documents are included. Incomplete applications will not be considered.

Do I have to show financial need to apply for a scholarship?

Criteria varies for each scholarship. Some scholarships are need-based, others may give preference to those demonstrating financial need and others do not take financial need into consideration. All students are required to complete the Free Application for Student Financial Aid (FAFSA). Graduate student scholarships may not require financial aid criteria.

Why don’t I see any scholarships on A2O?

Scholarships for students in the College of Health Professions and Sciences become available in early spring with applications due in late spring. Each scholarship can have its own unique deadlines. Students are encouraged to check A2O frequently.

How will I know if I’m awarded a scholarship?

All scholarship applicants will receive an email if a scholarship has been awarded. The email will include information on the next steps. Awardees can expect an email in May.

I was awarded a scholarship! What do I do next?

Why did I only get half the amount of the scholarship?

Scholarship funding will be split equally in half to cover fall and spring semesters unless the student is graduating in December in which case, all funding will be applied to fall semester, per request. All scholarships will first apply to any remaining balance on tuition and fees. If there is no remaining balance, then students will receive a direct deposit or check for the remainder.

What if I graduate before using all the scholarship funding?

Scholarships are awarded for the entire academic year-fall & spring. If a student graduates in the fall, they will have to email the UCF Financial Aid Scholarship Department at [email protected].

I’ve not received my money yet. Who should I talk to?

For any questions regarding scholarship disbursement or refunds, please contact the Office of Student Financial Assistance to speak to an advisor.

Do you have any tips for applying for scholarships?

Students are recommended to the Scholarship Tips & Links the UCF Office of Student Financial Assistance has compiled.

Establishing your own scholarship program is an excellent way to create a legacy and support promising and deserving students. These gifts can also be a meaningful act to honor or memorialize friends, educators, or family members. Your generosity will ensure that the best, brightest, and most deserving students are supported on their path to excellence.